Just a couple of days ago I posted an article on my iphoneraw.com blog which compared the iPhone X DNG output with an M4/3 camera and Pro lens.  The results were more than a little interesting, and it was nowhere near a clear knock down win for the M4/3 camera in all situations.

It's a funny thing when you do reviews and tests and especially those related to mobile technology, it always seems to bring out the trolls and those souls who just can't wait to find fault and issue, most of whom I'm sure would never take the time to do an in-depth analysis of their own.

You have to love the gratitude of these folk...not.

I get so excited when they bag out test pics as boring photos, well doh, they are standardised test pics intended to show specific characteristics, they're not intended as social commentary, fine art, etc.  Here's the thing, fine art, social commentary and portraits of pretty women don't usually tell you much about a camera, lenses or systems performance.  Clearly, these trolls have no concept of scientific process.  Still this test does use a nice location as the vehicle for analysis.

Anyhow, when you have stuff published widely across the web, you're bound to get some trolling, though I must say that in most cases these wild negative comments often indicate they didn't even read the article in question in the first place.

In the above article, I made it patently clear I was comparing the iPhone and M4/3 systems under reasonable to good light, the sort of light that most people tend to shoot under.  I also made it clear that if you compared them under low light conditions, there's little doubt the M4/3 gear would win hands down.  But, of course, some smarty pants on a couple of publishing sites had to harp on the idea that the whole test/review was void because the iPhone would be hopeless under low light....go figure.

It's as if these guys (and it is usually guys) assume you have only tested precisely what you put in the article and you don't know anything else about the processes, camera, lens etc.

Oh, enough of my ranting, let's do something constructive

Here's the thing I did actually run a comparative test between the iPhone X and M4/3 under low light and while I've not published that yet, I thought what the heck, I'll put a little version of that up on my regular blog, which is meant to appeal to the ordinary photographer market. The final version of the article is much more involved and includes analysis of clever alternative options as well, that will be on my iphoneraw.com site soon.

The test subject here is the organ and east window at St Saviours Cathedral in my hometown, Goulburn NSW.  This is a very high contrast subject and it's pretty dim light, for a good result the highlights within the stained glass window need to be recorded, meaning the exposure is set so as to record those areas without clipping and all the other tones are allowed to fall where they will.

This is just the sort of subject that will stress out small sensors with limited dynamic range capability because frankly, much of the scene is going to be severely under-exposed and hence potentially very noisy and poorly resolved.  If you were shooting in JPEG you'd no doubt try to use a HDR method, in this case though, the test frames are single exposure captures with a single RAW/DNG extraction.

It's also the sort of image that a lot of travellers would like to be able to capture with their iPhones but usually assume would be close to impossible if they have an eye on good quality.

Now just so we are really really clear, cause I know that trolls and others with vested interests (like defending their gear of choice) just love to find some imaginary wedge to drive between one's bum cheeks, mine in this case.  I am not, repeat not, saying I would choose to use an iPhone for this type of work in preference to other more suitable alternatives given a choice, nor am I telling you to do so. I always tell my students that they should try to use the best tool for the sort of job they have in mind, otherwise poor results and frustration will prevail.

Often the only photo tool that many folks own or have at hand is their iPhone, and does this mean they have to just pack up and go home without the shot?  Of course not, they use what they have, so this little test is about showing these fine folk what they might be able to expect.

The good news is the difference between the two devices when shooting in RAW is not all that great, sure the iPhone images show a bit more luminance noise but detail and colour are fine, so if you're stuck with your iPhone 8 or X model, be confident that you'll still be able to get a solid result.

Disclaimer: Ultimately with RAW files, it comes down to processing choices, The iPhones DNG files can really sing a good tune with appropriate extraction settings, I've a good idea of how to do this but of course many people with fewer miles on the speedo might find it challenging to replicate these results.

Ok so the technical details, since I know that you will ask.

Both shots are hand held, I was trying to keep it real, most holiday and casual shooter would not carry and use a tripod for this, though I most certainly would, especially if this were a commercial job.

The shutter speeds were kept the same for both devices, 1/50 sec

The ISO for the iPhone was 25, which is slightly above the 20 ISO minimum, the Olympus was 500 ISO.

Raw file extraction was carried out in Iridient Developer and adjsuted to give a similar look for both devices.  Post images were then fine tuned in Photoshop.

The iPhone was captured using my go to DNG app, ProCamera.

Both cameras had the exposure set to maintain the brighter tones in the stained glass windows.

Both are single frame captures and raw extractions.

That's it then, as much as possible I have tried to keep it a fair fight.

So here is the $64.00 question for you, I have not tagged the pics, so you decide, which one is the iPhone shot?  No don't skip to the bottom first, check the pics out. 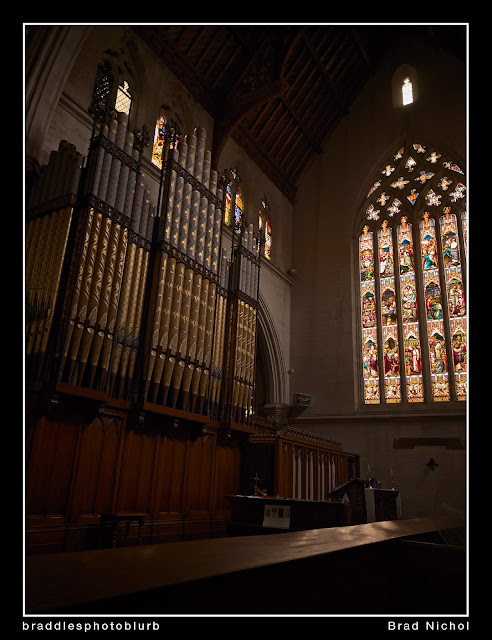 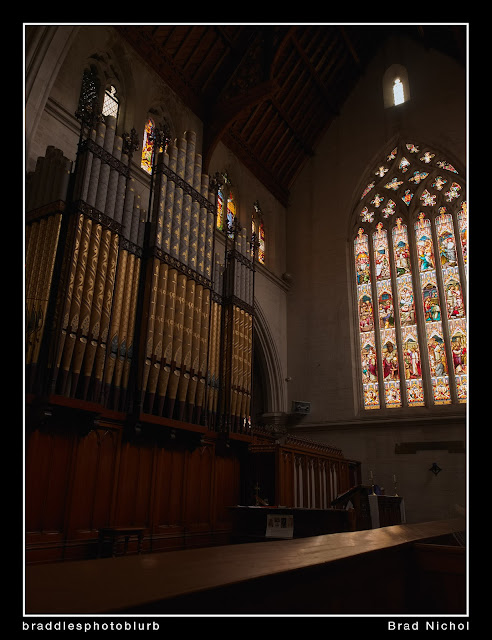 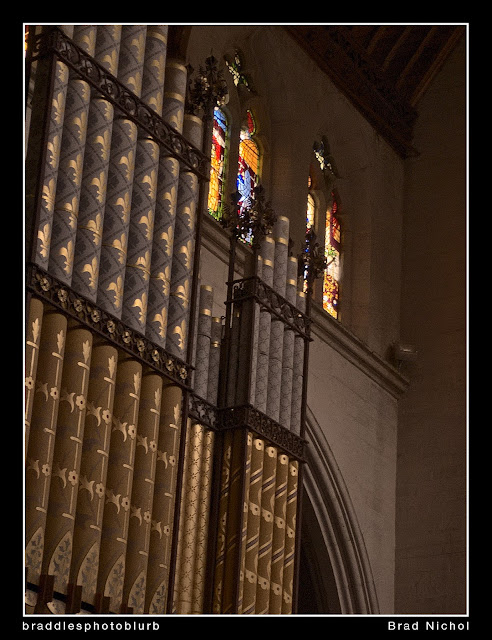 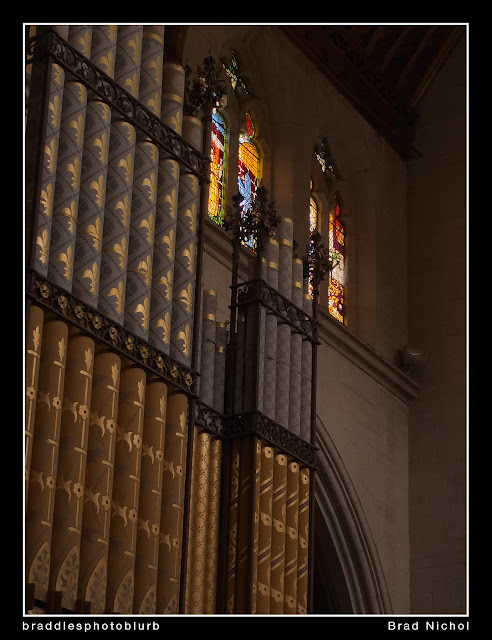 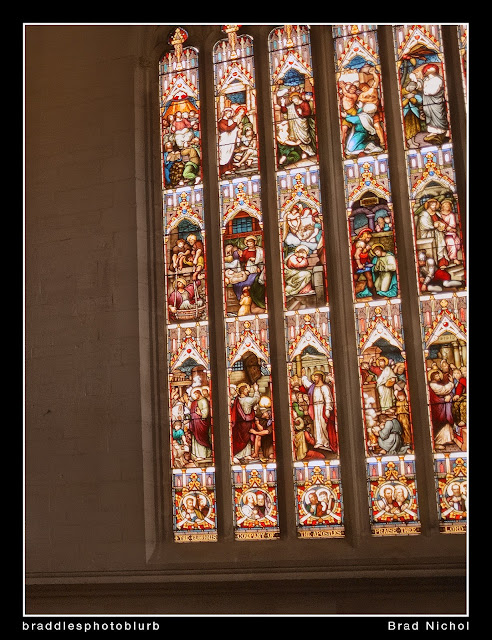 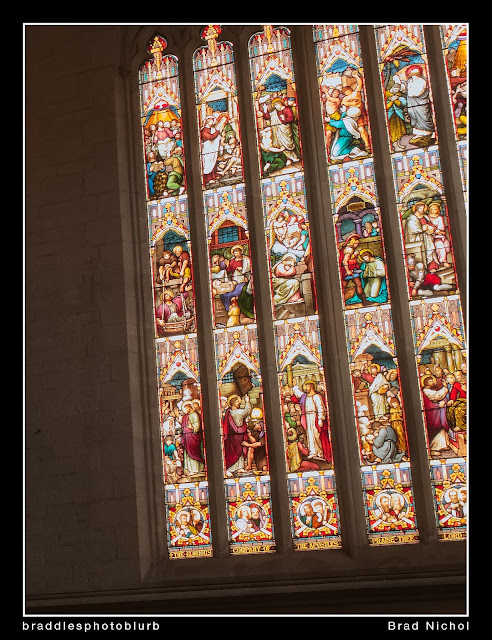 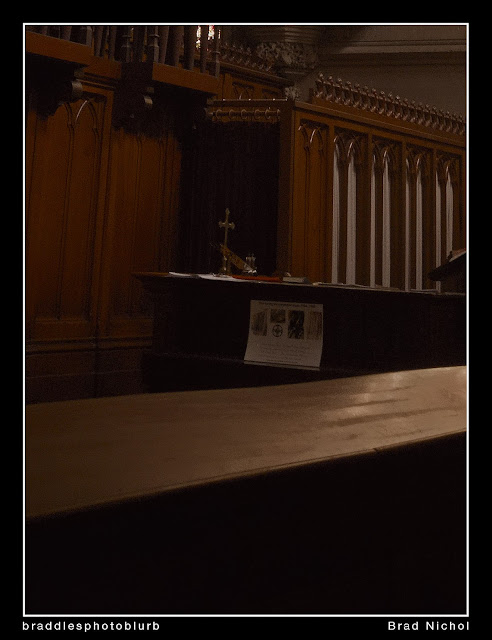 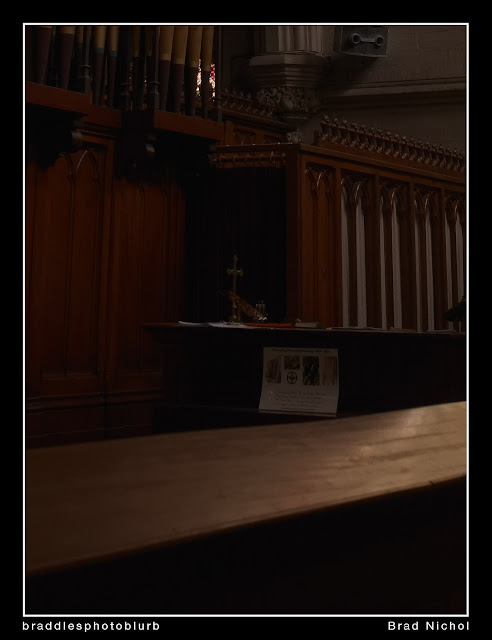 So there is not that much difference, is there?

The answer is that the iPhone X is the top image in each of the pairs.  Either would make a great print 11 by 8 inch print and both are utterly fine for any on-screen use.

I have lots of other iPhone RAW articles on my iPhoneraw.com blog and details on my "Ultimate iPhone DNG" iBook, if you have a few minutes to spare, please chack the site out.

Posted by braddlesphotoblurb at Wednesday, March 07, 2018